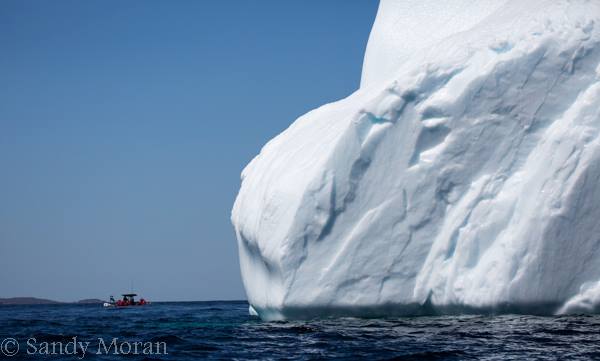 It was August of 2015 and we had just left the Viking Settlement in L’anse Aux Meadows.  We were still basking in the afterglow of a magical historical moment.  We kept repeating that we couldn’t believe we had walked in the places where Vikings lived and walked hundreds of years ago.  And then we turned a bend in the road and at the exact same time said did you see that ?   We couldn’t believe it, an iceberg, this late in the season, we must have been hallucinating. So we backed up a little to the crest of the hill and there it was-an iceberg !   We were overjoyed-we never expected to see an iceberg this late in the season.

We decided to try and get closer to it, so we started to turn down every road that looked like it took us to the sea.  But alas, all we kept doing was running into impassable hillsides or deadends.  Then we went up a little side road and came upon a young couple picnicking on the hillside.  “Have you seen the iceberg?” we asked.  “Oh yes, they answered, but not from here, you have to go into Griquet for a better view”.  We thought they were saying Cricket and they laughed and explained it was St. Lunaire-Griquet , and it was just down the road from us.  So we jumped back in Ruby and took off for Griquet. We kept passing fleeting images of the iceberg and were just about to burst with excitement when we came upon the turnoff to Griquet.  As we pulled in, there it was, larger than life, our iceberg.

We were so enthralled and excited over the iceberg we didn’t notice the people lining the shore or the gentleman running up to us like a crazy man !  He came up to Jim’s window, as excited as a 6 six year old, yelling with laughter and excitement asking if we wanted to share a ride out to the iceberg-well of course we wanted to, who wouldn’t want to get up and close and personal to an iceberg?

I don’t remember the name of the man who so graciously invited us to share his ride to the iceberg, but he quickly explained that Joe Pilgrim was acting as the safety boat for a local row boat race in the bay and was willing to take us on a quick ride out to the iceberg.  We couldn’t believe our good fortune and believed that the gods of Newfoundland were smiling down on us.  As we climbed down from the rickety wooden dock into Joe’s boat, a local news reported yelled out to us that we were in for a true “Newfie” experience.

Now I understood the excitement of the man who ran up to our RV.  I couldn’t believe I was sitting in a boat on my way out to an iceberg.  Never in my wildest dreams did I imagine this would happen to us on this trip.  We knew it was late in the season and that the icebergs should be all gone, but there she was, in all her beauty, so white it was blinding and making the water look even bluer than it was. 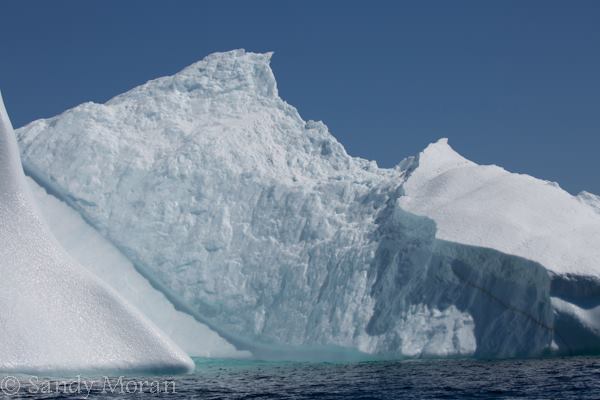 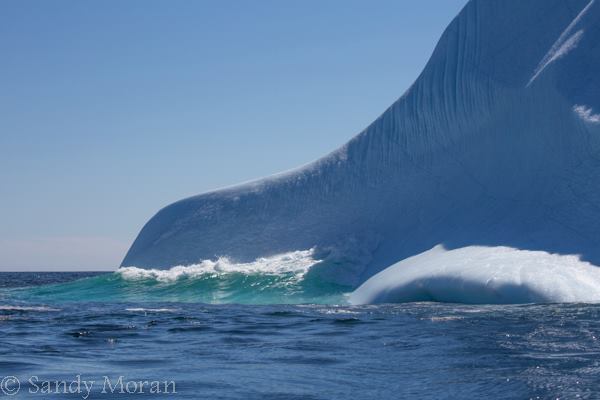 As we approached the iceberg, Joe turned off the engines on the boat and we sat in silence basking in the beauty of nature.  Joe talked of his father and told us the story of how he and his father had built the boat we were riding in.  He shared with us the recent loss of his father and then told us the boat was re-named.  Joe decided the way to honor his father and have him with him, in spirit on the sea,  was to name the boat after him. The name on the boat is his father’s signature that Joe had made into a graphic.  I was so touched by this man’s story and reminiscence about his father, I can’t tell you  how blessed I felt that he was sharing this story with us.  The iceberg became secondary to the trip.

And then Joe looked at me and said , “I’m sorry I couldn’t make your day and get you closer to the iceberg”.  I told him that not only did he make my day, but he made a memory that will stay with me my lifetime.   What a sweet man, sharing a moment in his life with us.  This is why we travel.

It was time to head back to shore, after all, Joe was the safety boat for the race and we didn’t want him to get in trouble for taking us on a journey that will forever be in our hearts.

Back to the shoreline and the town of Griquet .  Time to say goodbye.  Joe will never know how he moved us that day.  Another Newfie opening his heart to strangers, taking them in and sharing his life.  God I love Newfoundland and its people.

Click on the logo, save 15% on your membership and I get $15 for the referral. Thank you.