What I’m listening to on my iPod: Van Morrison-Moondance

Approaching Smithers was another jaw dropping experience.  The mountains outside of town and surrounding the town are incredible.  I’m going to have to start looking for new adjectives to describe what we see on a daily basis-we are constantly awe struck.

The town of Smithers was an extremely pleasant surprise.  Most of the small towns we had run across had a gas station and maybe a small grocery store.  Smithers seems like a typical mountain town, with hikers, bicyclists, horse back riding, fly fishing, skiing and pretty much anything else you want to do outdoors.  What was a sweet surprise was the vibe-it felt so welcoming and friendly.

We took a little tour around town in search of a fly fishing shop for Jim and found it in the middle of town.  Everyone here looks so healthy and happy.  And with the view they have I would be too !

We decided to drive around the small housing community that surrounds the town.  Mostly we found small horse ranches at the base of the mountains, separated by a myriad of salmon streams-just so beautiful.

When traveling we usually like to avoid stopping in towns but Smithers was definitely the exception.  We loaded up on groceries and some cold beer with Terrace, BC our destination.  We had an appointment with the Freightliner folks there to check out our brakes, bearings and under carriage. (You know, after our mud puddle adventure at Cobb Lake). 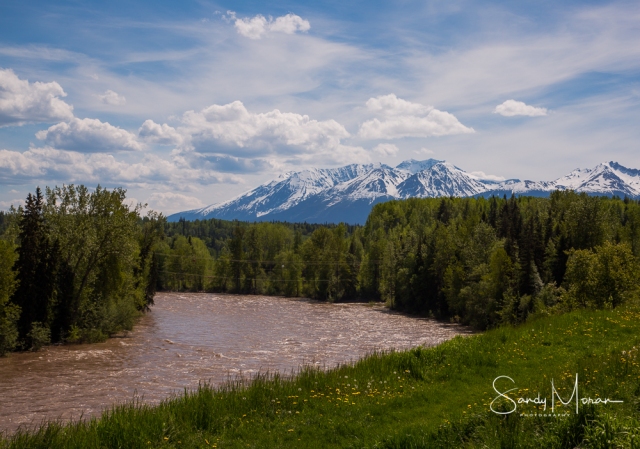 The rivers are still running high and muddy from the snow melt off, so no river fly fishing for Jim-yet .  I can tell he’s imagining what it would look like.  The locals tell us the salmon season is delayed because of the crazy weather and they are running 2-4 weeks behind.  Hmm, climate change ?

As soon as I jumped out of the car at the Moricetown Canyon pull out, this raven flew over my head and landed on the sign.  I know the raven brings a great deal of symbolism and lore to the Native American culture and many many more.  I found this on a site about the symbolism of the raven:

“The Native Raven Symbol or Totem Raven: Mischievous and curious the Raven is the cultural focus of the Native Northwest Coast People. He symbolizes creation, knowledge, prestige as well as the complexity of nature and the subtlety of truth. He also symbolizes the unknown and is there to show that every person sees the world in a different way as another. The Raven was often called upon to clarify truths in visions, as the wise elders knew that what the eye sees is not always the truth. Many of the original peoples of the Pacific Northwest Coast refer to him as a god, and it is believed by some that messages from the creator or the cosmos are buried in the wings of the Raven only to be released to the families most deserving of his knowledge. The Raven is a long distance healer and is known as the “keeper of secrets,” he helps us in our lives by exposing the truth of kept secrets that could potentially harm us, in doing so he helps us back to good health. The Raven was only ever feared if misused.”  The raven just sat on the sign, looking out at the canyon and occasionally down at me.  I feel a little bit of a spiritual tug when animals react that way around me, it’s a feeling I’ve learned to love and appreciate.

A bear, a bear, Jim and I were both yelling.  We couldn’t believe it, we were giddy and as excited as 3 year olds .  This was just outside Hazelton, BC close to Ross Lake Provincial Park.  Jim figured if a bear came from that direction, maybe there were more and we should go looking for them-so we did. 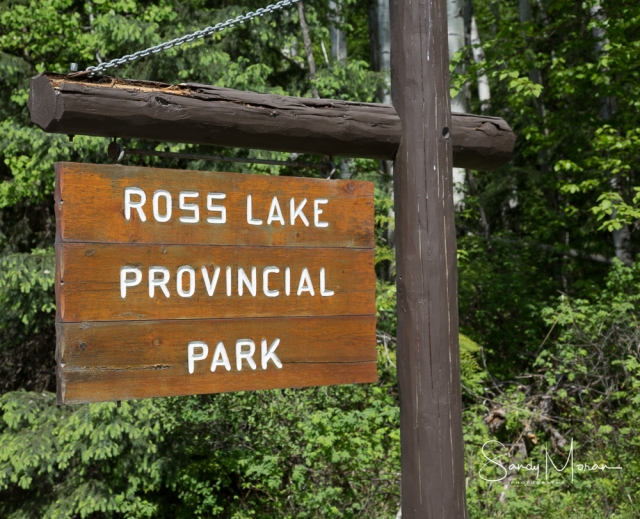 This is a quiet and peaceful day use park-but I’ve read on line that most folks do wild camp here for a night and no one bothers them.

There are hundreds and hundreds of aspens on the hillsides and through out the woods.  I would love to return in the Fall, I imagine it’s even more breathtaking with the golden leaves shaking in the wind. 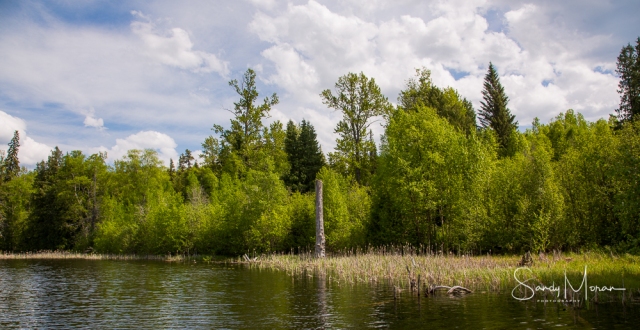 We made it to Terrace, BC and planned on some wild camping.  So we headed up a side road in search of some forest roads or pull outs.  Unfortunately , every side road we encountered was better suited to 4 wheel drive, which we don’t have and we didn’t want to push our luck. So we headed towards Lakelse Lake Provincial Park.

We felt like Goldilocks, this one is too muddy and bumpy; this one (Lakelse Lake) is to huge with too much shade; and then we passed the entrance to Water Lily Bay Resort.

I looked up their phone number to see if they had any space, and Mike the owner said he had one left.  I told him we were just down the road and would be there in 5 minutes.

And like Goldilocks, we both agreed, this one was just right !  Mike, the owner, is a really nice man.  The resort has been in his family for over 50 years.  He told us stories of how high the snow gets; stories of the bears that frequent the campground and stories of the rowdy people who party at Lakelse Lake Provincial Park-so glad we didn’t stay there.

Sadly, Mike is looking to sell the resort.  It’s gotten to be too much for him and his wife.  If you want to own a sweet little place on the lake give him a call.  Most people who stay here are locals who have been coming to the resort for generations.  It’s a pretty mellow and quiet group and just an overall nice place to stay.

We have no idea what lies ahead of us- we are just looking forward to it with adventurous spirits.  We will spend a day in Terrace, BC getting Ruby looked over and then heading to the Cassiar Highway.

I can’t begin to tell you how overwhelmed I am at the beauty we see on a daily basis-and we haven’t even made Alaska yet.  It truly is the journey and not the destination.

Here’s wishing a little beauty in your lives on a daily basis, happy trails and safe travels.

6 thoughts on “Smithers, BC to Water Lily Bay Resort & All the Beauty in Between”